Did You Know Boris And Natasha Of "The Rocky And Bullwinkle Show" Had Last Names ? I Never Knew That !

Boris and Natasha were a cartoon duo that appeared on The Rocky Bullwinkle Show. Natasha Fatale was a character in the show and was voiced by June Foray. June pass away in 2017, she was 99 years old.

Natasha is a spy for the fictional country of Pottsylvania. She takes orders from the country's commander; his name was Fearless Leader. Natasha usually serves as an accomplice to fellow spy Boris Badenov who was originally voiced by Paul Frees.

Boris and Natsha were both modeled after two original characters, Gomez and Morticia Addams, do you remember the "Addams Family "tv show? 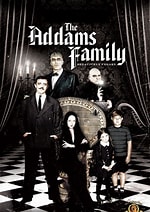 at March 29, 2022 No comments:
Email ThisBlogThis!Share to TwitterShare to FacebookShare to Pinterest

Who wouldn't want that futuristic talking phone watch back then. I know I played like I had one back in the early sixties. That is about the timeline Dick Tracy became an animated cartoon series, 1961. Dick Tracy could receive and transmit messages on his talking watch, now that was cool beans high tech back in 1961. Now lets do a little history on Dick Tracy that I researched. Chester Gould's first idea

for a character was a detective who worked for the Chicago police department. He then submitted this character idea to the syndicate (Chicago Tribune New York News Syndicate), which suggested changing his name to Dick Tracy and creating a story where he worked for the Chicago police department. Dick Tracy was first published on October 4, 1931, and he was instantly popular. Dick Tracy would be the most popular comic strip character in the United States. In April 1937, a poll of adult comic strip readers in Fortune voted Dick Tracy their third favorite comic strip after Little Orphan Annie and Popeye. However, Dick Tracy was also attacked by some journalists as being too violent.

Now what about the animation Cartoons: The cartoon series was made from 1961 to 1962 by United Productions Of America(UPA)it was called the "The Dick Tracy Show".

In the episodes, policeman Dick Tracy was supervisor over a few subordinate characters to fight crime each week, contacting them on his two-way wristwatch radio. Dick Tracy himself hardly ever appeared in the cartoons at all. His boss would be barking orders into a intercom to Tracy, with Tracy answering "Okay, chief, I'll get onto it right away."

The Dick Tracy Show was pulled from the air in the mid-1970s and mid-1980s, some people seen it as ethnic stereotyping and was not seen for years later. This was do to characters Joe Jitsu, an Asian bucktooth character and Go Go Gomez a Latino character. Here is a cartoon short so you can see for yourself.  UPA chairman Henry Saperstein 1990 said this," it's just a cartoon, for goodness sake". Well some folks just don't get it !, maybe he would if he was Asian or Latino he might feel differently. BJ 🙈🙉🙊

at March 20, 2022 No comments:
Email ThisBlogThis!Share to TwitterShare to FacebookShare to Pinterest

"Clutch Cargo" animated cartoons were done without very much animation. Mostly their mouths moved and some hand and feet movement but strangely enough it kept my attention as a young boy. Limited animation was first used to create an appealing cartoon in Clutch Cargo. The first cartoon to use Syncro-Vox was Clutch Cargo, a surprise hit at the time. This was because of the need for animation to be created within a tight time frame. Syncro-Vox was invented by Edwin Gillette, television cameraman and partner in Cambria Studios, as a means of superimposing real human mouths on the faces of animals for the popular "talking animal" commercials of the 1950s. Clutch Cargo employed the Syncro-Vox technique by superimposing live-action human lips over limited-motion animation or even motionless animation cells.
There was a limited amount of music in the Clutch Cargo series. It was mostly provided by Paul Horn using only the bongos, vibraphone and flute. The stories were set in a fictitious world in which the character Clutch Cargo was a jet pilot. The stories were presented in five 5-minute chapters, with the first four chapters ending in cliffhangers.
The late actor, Richard Cotting, is best known for playing the voice of Clutch Cargo, the hero of the hit television series, Clutch Cargo. However, he was much more than that. He was an accomplished actor, writer and producer. The characters that you see on "The Clutch Cargo Show" are actors who played the mouth moving characters on the show. This includes Hal Smith who played Otis Campbell the town drunk on the "Andy Griffith Show"

and Margaret Kerry who brought Spinner and Paddlefoot to life. 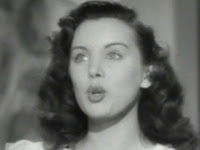 The show only lasted about a year, starting in 1959 and ending 1n 1960. Fifty-nine cartoons were made. Now without further ado...here is a clip cartoon of "Clutch Cargo."
BJ 🙈🙉🙊
at March 14, 2022 No comments:
Email ThisBlogThis!Share to TwitterShare to FacebookShare to Pinterest 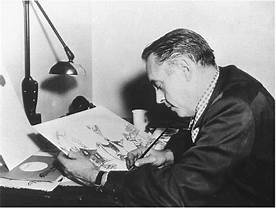 Frank Tashlin was born on 19th February 1913, in Weehawken, New Jersey. He dropped out of school at age 13 and drifted from job to job, but he was just as much a drifter in his animation career as he had been as a teenager. He joined Warner Bros. in 1933 where he was known as "Tish Tash". He was fired from the studio when he refused to give Schlesinger a cut of his comic strip. He joined the Ub Iwerks studio in 1934.

As a director at Warners, he was known for his ability to create innovative and original imagery. He did so much so quickly that he had to leave Warners to work at Disney. He was making $150 a week at Warners. At one point he had an argument with the studio manager and resigned.

He was a Columbia Pictures executive in the 1930s. He was fired in 1941 for a heated argument with the studio executives. He then went on to found the Fox and the Crow series which was one of the better products of the studio.

He was known to have made a number of films at Warner Bros. His last film, Bugs Bunny Hare Remover, is his last credit at the studio. one co-worker described him as "Here today, gone tomorrow. Now you see him, now you don't. That was TishTash, who would be working at your studio one day, and, suddenly, gone the next day. He died at age 59 from a heart attack in los Angeles..... BJ 🙈🙉🙊