Back in the 60's, 1965 to be exact. I used to watch a so called knock off of, "Atom Ant"/ Mighty Mouse, well maybe not the Mouse because he wasn't an insect. As annoying as a real house fly can be, I thought "Fearless Fly" was kind of cute cartoon ("can I say that") I'm a dude, Lol. It held my attention, and I was 12, in 1965. The superhero fly was Hiram, a fly that lived in a matchbox. It was the most popular addition to the Milton the Monster Show 1965. When danger came about, he went into a matchbox, kind of like Superman and a telephone booth, changed into a red sweater and put on a pair of super powered glasses and became a superhero named Fearless Fly. According to the opening scene, he was more powerful than a speeding rocket and faster than a beam of light. No fly swatter could harm him, no fly paper could hold him, and no bug spray could kill him. His chief nemesis was Dr. Goo Fee, and his sidekick Gung Ho. Fearless Fly was powerless without his glasses, he would always express his fate by telling the audience, "My glasses! Without them, I'm helpless!"  but always found them in the nick of time. Hiram would always stop at the Sugar Bowl Cafe to talk with his girlfriend Flory and a bully named Horsey the Horsefly. 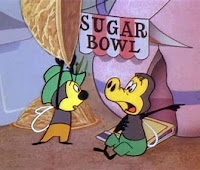 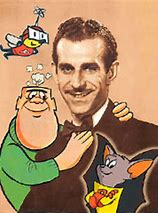 Fearless Fly had about 26 episodes. For more on those episodes use my wiki search at the top of my blog...Now for a look at Fearless Fly cartoon. BJ/ 🙈🙉🙊

at June 23, 2022
Email ThisBlogThis!Share to TwitterShare to FacebookShare to Pinterest