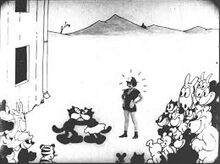 You thought Michael Jordan was a slam dunk
inserted into a cartoon with "Space Jam" 1996🏀. But in 1920 Walt Disney ingeniously came up with a cartoon short named "Alice Comedies". This young real girl was inserted into a cartoon animated world with Julius the cat... he looked like a version of Felix the cat to me. This was Walt Disney's first successes. The history of this cartoon series goes a little like this. Four actresses actually played Alice; Virginia Davis was the first, followed by Dawn O'Day, Margie Gay, Lois Hardwick. Alice wonders into a cartoon studio and looks at how cartoons are made, all of a sudden that night she begins to dream about the characters she saw in the studio. She sees herself inside the cartoon with all the animated characters and begins to play with them. This cartoon short and others.... I believe 26 of them, became the stage for what was to become Alice Comedies. Eventually the Alice series became some cartoon and non-cartoon characters with real people, but I'm not sure when it converted over. I'll leave a link here to help better explain the timeline of the short series' rather than my short version of this. And also, Alice eventually became "Alice In Wonderland" But I'm only here to talk about the animation cartoon version of this history./ BJ🙈🙉🙊
I have a couple of animated cartoon versions of "Alice" on the side bar.

at December 29, 2021
Email ThisBlogThis!Share to TwitterShare to FacebookShare to Pinterest 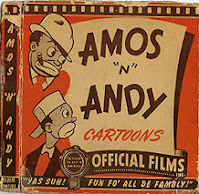 Remember the "Amos n' Andy" Show? but I bet you didn't know about the two cartoons that Van Beuren Studios made about the famous radio and tv series.  January 12, 1926, A two-man comedy radio show “Sam ‘n’ Henry” debuts on Chicago’s WGN radio station. Two years later, it changed its name to “Amos ‘n’ Andy,” the show became one of the most famous radio programs in American history.  While the show had a brief life on 1950s television with black actors, the 1928 to 1960 radio show was created, written and voiced by two White actors, "Freeman Gosden" and "Charles Correll", who played Amos Jones (Gosden) and Andrew Hogg Brown (Correll). Black actors "Alvin Childress" and "Spencer Williams" took over the roles of Gosden and Carrell, the show was the first TV series to feature an all-Black cast and the only one of its kind for the next 20 years. This did not stop African American advocacy groups and eventually the (NAACP) from denouncing both the radio and tv series version. These protests led to the tv show’s series cancellation in 1953.  But you say..."What about the animation cartoons"? Well, there is very little history surrounding the animated cartoons but here is what I could only round up. Van Beuren Studios produce two animated cartoons of the famous radio show in 1933 and 1934..."The Lion Tamer" and "The Rasslin Match". Both cartoon shorts were short lived, but in my in my opinion, it was because Van Beuren Studios closed shortly thereafter (1936) and the cartoons did not fare well. George Stallings was the animator assigned to these cartoons. George Vernon Stallings (No Pic) September 9, 1891 – April 9, 1963, was an American animation director and writer. He started working for Bray Productions in 1916 where he directed the "Colonel Heeza Liar" series of shorts, and the "Krazy Kat" shorts. He invented "the animation disk placed in the center of the drawing board" in the 20s. Its primary use by 1930 was as an aid in inking cels. He then worked for Van Beuren Studios from 1931 through 1934.

If you have any more history on these animated cartoon shorts or a picture of George Stallings, let me know.  I have one of the cartoons on this blog below.

at December 24, 2021
Email ThisBlogThis!Share to TwitterShare to FacebookShare to Pinterest 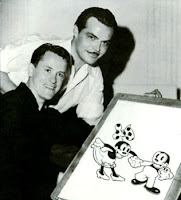 In 1927, Harman and Ising were still operating for the Walter Disney Studios on a series of live-action animated short subjects called the Alice Comedies. The 2 animators created Bosko in 1928, a not so racist black cartoon which was pretty funny,to take advantage of the new "talkie" craze, that was sweeping the film industry. They began planning and creating a sound cartoon with Bosko in 1928, before their departure from Walt Disney. Hugh Harman created drawings of the new character and registered it with the copyright workplace in 1928. "Bosco" the character was registered as a "Negro male boy" underneath the name of Bosko.

Hugh Harman and Rudolf Carl "Rudy" Ising, were both born the same month and year, August 1903. Harman died 1982 and Ising died in 1992. The dynamic duo were former film maker employees, getting their begin on series such as the "Newman Laugh O Grams", the "Alice Comedies" and "Assassin the Lucky Rabbit", helping to jump-start the Warner Bros. Cartoon Studio in 1929, which they helped get MGM' animation department off the ground also. They were conjointly the creators of Bosko, the "Talk-Ink kid", and Foxy, and also MGM' Happy Harmonies, the "Barney Bear" shorts, and much of one shot shorts, along side the associate degreeti-war short "Peace on Earth". They definitely had a significant role in shaping the events of The Golden Age of Animation. They moved around a bit from Disney to VanBuren Studio to Warner Bros. and their own studio then back to Disney, that jumping around just probably meant they were good at what they do ! At least that's what I think ! but I wasn't even born yet ! (my 2Cents worth). BJ

at December 21, 2021
Email ThisBlogThis!Share to TwitterShare to FacebookShare to Pinterest

This is rich animated cartoons at it's best short lived, in my opinion.
Many of the Rainbow Parade cartoons were one-shot stories, but several of the films featured, Parrottville Parrots, Molly Moo-Cow, Toonerville Folks, and Felix The Cat. Commonwealth Pictures bought the Cartoons in 1941 and was later played on television. In 2021, Thunderbean Animation in association with Blackhawk films and UCLA released a collection of the first 13 Rainbow Parade cartoons from the existing master materials, updating them from 2009.

Rainbow Parade (1934-1936), which featured new cartoon characters, Molly Moo Cow, and older ones, namely Felix the Cat, and Toonerville Trolley. This was the first of Van Beuren’s series and people fail in love with the animation which achieved both recognition and success. Also, this series is considered by many writers and scholars to bring the most sophisticated and visually creative cartoons out of all Van Beuren shorts.   Despite the success that Van Beuren Studios started to achieve with its series, RKO Radio Pictures studio’s distributor, decided in 1936 not to distribute Rainbow Parade Cartoons anymore, and as a result ended distributing for Van Beuren’s shorts.

Van Beuren was unable to find another distributor and was forced to close the studio in the same year.  The Van Beuren cartoons were sold to Officials Films, and Commonwealth Pictures. They changed the names of some of the characters and shorts and sold them for television release and home-movie distribution.