Well, let's take a look at some cartoon history facts to find out. Do you remember "Yosemite Sam" cartoon? and Red Skelton, actor/comedian that had his own television show from 1951-1971 who always ended his show with the words " God Bless". In one of his movies, he played Sheriff Deadeye who inspired Yosemite Sam. Can you tell the resemblance? The eyebrows and the mustache, you need to see the clip from YouTube...

Disney's Tinker Bell was just a sweet little fairy (1953) that I would envision being the tooth fairy putting money under my pillow after I lost a tooth, of course it was my mom that put the money there, 😏 I was a little boy. "I can't help it; I was Disney mesmerize as a kid". Anyway, Margaret Kerry was a model/actress that the inspiration for Tinker Bell came about for Disney's animated movie Peter Pan. Kerry was behind the movements of the animated character for the movie that most people my age (69) and younger remembered and loved. Didn't you love Tinker as a Kid? I know I did, and I was a small boy. Lol

Mr. Magoo was one of the funniest animated cartoons ever made. Won an academy award for best animation short films 1954/1956. John Hubley the creator of Mr. Magoo was inspired by W.C Fields actor/comedian's looks, so Mr. Magoo was created in 1949. John Hubley also said his uncle Harry Woodruff had some input of the creation of Mr. Magoo. The nose and eyebrow are spot on. "What do you think" ?

The "Captain Hook" character in Peter Pan (1953) cartoon movie was also inspired by real person...Hans Conried/comedian. Conried was only to be the voice of Captain Hook, but later on Disney staff thought he was Captain Hook human model in the flesh. One staffmember on the project insisted that Hook should be a darker villain, but this was rejected for fear of scaring younger audiences. They decided to keep Captain Hook a more comical figure. So, Hans Conreid provided the looks and personality of Hook.

You remember "Archie Comics" and later on animated cartoons. Archie and his side kick Jug Head, "for crying out loud". Of course, you old timers remember Mickey Rooney/actor and you younger folks probably remember him in the "Black Stallion" (1979), but he was a star back in 30's and 50's, my grandmother use to say," look at his little, short butt" and laughing her head off. Sorry, just reminiscing 💭. Back to history... Mickey Rooney played a fictional role by the name of Andy Hardy, a love-stricken teenager that inspired the role of Archie. There were a few more I could add to this post, but maybe later....gotta make a run! / BJ 🙈🙉🙊 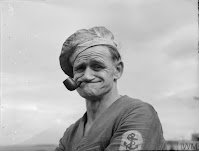 "Popeye" the sailor man was base off a real person by the name of Frank Fiegel. The creator of Popeye knew a man in Chester, Illinois who he based his cartoon character after. He smoked a pipe and was somewhat of brawler. I did a full blog post on Mr. Fiegel on this website and its pretty interesting story. Just go to the older post tab and check it out. / BJ 🙈🙉🙊