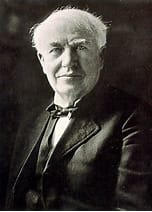 You probably remember him as the famous inventor who invented the Light bulb💡 Edison was an American inventor and businessman and developed many devices that influenced everyone in the world. The devices invented include the phonograph, the camera and the kinetoscope. The Kinetoscope is one of the first cinematographic devices, created in (1894). It was designed to allow one person at a time to watch movies through a peephole at the top of the device. The Kinetoscope was not a movie projector; however, it was touted as the basic approach

that would eventually become the main product for all film screenings before the invention of video. It created the illusion of movement by placing a perforated film strip with sequential images on a light source with a high-speed shutter.

The Lumiere Brothers in the 1890's, Louis Lumière and brother Augusté Lumiere wanted to develop a motion picture camera that would be much more advance than the invention invented by Thomas Edison called the kinetograph... it did not have a projector. The brothers wanted to develop a new break thru idea with sharper images and better lighting than the Kinetograph. The cinematograph they came up with weighed only 16 pounds, which meant it was easy to transport. Also, the cinematograph was operated manually with a single crank, while Edison's, was electric powered and heavy. While only one person could use Edison's kinetoscope to see through an eyepiece at a time, the Lumiere brother's peep show style cinematograph could project an image onto a screen so that a huge audience could view the images at same time. Interesting History Note : The device was first invented and patented as the "Cinématographe Léon Bouly" by French inventor Leon Bouly on February 12, 1892. Bouly coined the term "cinematograph," 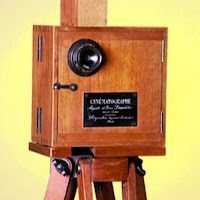 Due to a lack of funds, Bouly was unable to develop his ideas any further and maintain his patent fees, so he sold the rights to the device its name also to the Lumière brothers. In 1895, they applied the name to a device that was largely their own creation.

But earlier before all this great development with cinematography 1n 1877 a man named Charles Reynaud a French inventor was responsible for the first projected animated cartoons. Reynaud created the Praxinoscope in 1877 and then, on 28 October 1892 he projected the first animated film in public in Paris.

In my conclusion with this post, in my research it was a bit confusing who invented the cinematography first but there was a lot of competition amongst these great minds of inventors, and they all contributed to the great age of animation. / BJ🙈🙉🙊

PS... Don't forget to check out the video at the bottom of this post....."How animated cartoons are made". You had to have a lot of patience, Thumbs Up !