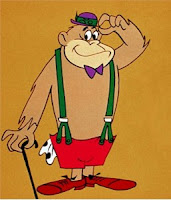 It was a popular cartoon show from the early 1960s, and by not telling your age, you may have seen it in the original broadcast – Magilla Gorilla. 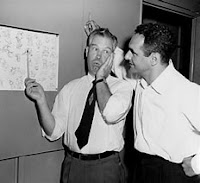 The cartoon story is built around a gorilla named Magillah that is own by Mr. Peebles Pet Shop, who has owned him since he was a baby. Now all grown up Mr.peebles could never find him an owner, this saddens Magillah and he is always trying to get adopted. Only one customer was interested in owning Magillah. This customer was a little girl named Ogee, but she could never

convince her parents. The theme song to Magillah was 'We've Got a Gorilla for Sale'.

Megillah Gorilla was a huge success and has appeared many times throughout our history in comics and other cartoon shows. For more detailed information please use my Wiki search bar at the top of my blog. Now I have a Megillah Gorilla cartoon for you, Now try not to tear up while Mr. Peeples tries to sell Magillah !    BJ/🙈🙉🙊 Vintagecartoon.network listed in Feedspot Top 50 Cartoon Blogs.... Yippie!! https://blog.feedspot.com/cartoon_blogs/

at May 19, 2022
Email ThisBlogThis!Share to TwitterShare to FacebookShare to Pinterest