You Know About Disney's "Snow White and The 7 Dwarfs" Cartoon but Did You Know The History and Controversy About A Black Snow White Cartoon 1943 ?.."I Bet You Don't" 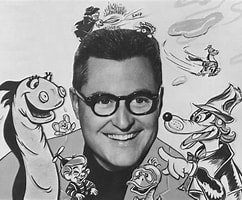 Bob Clampett's cartoon was a parody of Disney's Snow White and the Seven Dwarfs. In addition to that, he had his own take on a modern version of the classic story. He took the classic story of Snow White and presented a modern black version of it.  It was the first of its kind. He was inspired by a black musical revue that he attended, and he took his inspiration from that.
Carmen Jones was a black version of the famous Carmen opera and that might also might have inspired him. 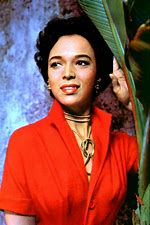 This Bob Clampett cartoon is called "Coal Black and the Sebben Dwarfs" because of the all black cartoon characters. 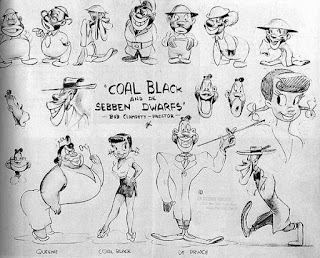 It is not surprising to find that some of the characters in the cartoon were quite stereotyped and demeaning. Characters like the ones in the cartoon were never meant to be taken literally, but used as a cartoon “shorthand” to express a particular idea or concept. The cartoon even included black men in uniform serving their country, something that was never seen in live action films or on the stage at the time. It was a cartoon for adults and not meant to be taken literally.
Black audiences loved the cartoon when it was first shown. If Disney saw it, there is no known comment from him. That doesn't surprise me, Disney was known for some bigotry at times according to some folks that work for him.
The cartoon was censored because it has a racial stereotype in it. In the 1960's, cartoons were censored because of the stereotypes. The cartoon was one of eleven cartoons prohibited from being seen on television or in theaters because of its potentially offensive material. The cartoon has been assumed to be more racist than it actually was.
Some Interesting Facts:
1. Duke Ellington suggested to Bob Clampett to make a cartoon focusing on black music.
2. Vivian Dandridge, sister of famous Dorothy Dandridge was the voice of "So White".
3. Louis Armstrong wanted to do the voice of Prince Charming but had busy schedule.
4. Why ? "So White"...because you just can't copy Disney per batum.
5. 1943 NAACP called Warner Bros and wanted it removed.
6. United Artist in 1968 banned the cartoon short from all circulation.
Got A Little Clip Of Cartoon Below... BJ 🙈🙉🙊
at May 31, 2022
Email ThisBlogThis!Share to TwitterShare to FacebookShare to Pinterest